HypnoBirthing™ – The Mongan Method was originally established in the United States by Marie Mongan, who is the founder of The HypnoBirthing Institute.

Her book “HypnoBirthing: A Celebration Of Life” was first published in 1989, and HypnoBirthing is now taught in countries all over the world.

The development of HypnoBirthing™ – The Mongan Method

When Marie Mongan’s daughter expressed her desire to have a child, she called upon her own experience of having laboured calmly, gently, and naturally, using the theories of Dr. Grantly Dick-Read, during the births of her four children back in the mid 50s and early 60s.

Using her counselling background, and her skills as a Master Hypnotherapist, she developed the HypnoBirthing™ program for her daughter and two friends. The success of these births brought several hypnotherapists to Marie’s office, asking to be trained in whatever she was doing in birthing.

From there the program grew and took on a life of its own. Medical people who witnessed HypnoBirthing became interested, and many became practitioners. Childbirth educators from other programs came to be practitioners as well.

Soon, the natural appeal of HypnoBirthing began to spread into the mainstream. Not long after that, in 1993, HypnoBirthing was introduced into Canada, and later into Australia, and finally into the UK.

Since then, many thousands of parents and their babies have joined the ranks of HypnoBirthing families. Today, HypnoBirthing is taught in twenty-two countries, and more locations are being added on a regular basis.

The program has been recognized by many leading newspapers and magazine publications across the world, as well as being featured in “Better Homes and Gardens”, “Newsweek”, and “Time Magazine”.

Because of HypnoBirthing, couples today can look forward to a beautiful, calm and serene birthing experience, where mother, baby and birthing companion combine in joyful bonding.

The origins of HypnoBirthing™

HypnoBirthing is based on the work of Dr Grantly Dick-Read, an English physician, and whose principles are also the foundation of the National Childbirth Trust (NCT).

In his book “Childbirth Without Fear”, originally published in 1933, he states that:

“There is no physiological function in the body that gives rise to pain in the normal course of health. In no other animal species is the process of birth apparently associated with any suffering, pain or agony, except where pathology exists or in an unnatural state, such as captivity.”

When we’re afraid, our body diverts blood and oxygen from non-essential defense organs to large muscle groups in our extremities. Our face drains of blood and we are said to be ‘white with fear’.

Dr. Dick-Read hypothesized that the fear felt by a woman during childbirth also caused blood to be filtered away from her uterus, so it could be used by the muscles that would flee the dangerous situation. As a result, the uterus was left without oxygen and could not perform its functions efficiently or without pain.

This belief led to Dr. Dick-Read’s theory that fear and tension cause the labour pains in approximately 95 percent of birthing women. He termed this phenomenon “the fear-tension-pain syndrome of childbirth,” and he believed that by eliminating the fear, women could return the uterus to its normal function, thereby eliminating the pain.

Curious about HypnoBirthing?  Or keen to do it, but dad isn’t so sure?!  Then please get in touch to come along to my next taster session on Monday, 10th February 2020 from 8pm-9.15pm in Bath, and you’ll be able to find out all you need to know!  I will explain why HypnoBirthing works, how it works and what you can expect from my courses so you can decide if it’s the right kind of birth preparation for you.  Places are limited, so please contact me to find out more and book a place.

As well as being a certified HypnoBirthing Practitioner, I am also a fully qualified Clinical Hypnotherapist specialising in Solution Focused Hypnotherapy, I can help with anxiety, stress-related disorders, depression and stopping smoking as well as the treatment of phobias (needles, hospitals etc), and much more.  Couples who sign up to my HypnoBirthing courses can benefit from a half price Initial Consultation (saving £35) and pay only £50 per session thereafter (saving £20 per session) or get £40 off a stop smoking session (£100 instead of £140). If you are interested, please contact me for further details or visit my Pure Hypnotherapy website for more information.

What People Are Saying

The magic of HypnoBirthing is that you almost don’t realise the profound effect it is having. It creeps up gradually, in my case from a fear of childbirth to a relaxed, calm, even excited attitude towards labour and birth. Having already read the book and watched many YouTube hypnobirths, we weren’t entirely sure that the classes would be money well spent but we are so glad that we decided to do them. Jessica & Chris, Feb 2013 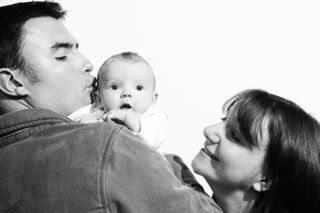 My HypnoBirthing classes are affiliated with the HypnoBirthing Institute and take place in Bath. I also cover the wider area, including Bristol, on request.